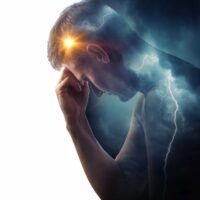 Post-traumatic stress disorder (PTSD) is a psychological condition most often associated with military service, surviving child abuse, or otherwise going through an emotionally traumatic event. Research conducted recently has discovered that survivors of physically traumatic events, particularly concussions by way of traumatic brain injury, may experience symptoms similar to patients suffering from PTSD. Continue reading to learn about how concussions can lead to PTSD symptoms, and reach out to a qualified medical expert with any additional questions.

PTSD is characterized by many particular symptoms, many of which are directly associated with the traumatic event. Patients suffering from PTSD often suffer anxiety, depression, irritability, trouble sleeping and concentrating, as well as “flashbacks” to the traumatic event and avoidance of similar behavior associated with the event. Several reports have found that patients suffering from PTSD are not the only patients to experience this particular combination of symptoms–many of them are linked to concussions and other traumatic brain injuries as well.

Patients recovering after a car crash or other traumatic brain injury often suffer a number of symptoms for weeks, months, or even years following the incident. This condition is called post-concussion syndrome (PCS). PCS is characterized by anxiety, depression, fatigue, mood swings, trouble sleeping, and other symptoms. PCS and TBIs generally are also associated with an increased risk of alcohol use disorder. These symptoms can be caused by the neurological damage associated with concussions. They can also be symptoms of PTSD.

Some symptoms detectable after concussions appear extremely similar to symptoms most commonly associated with PTSD. A recent study of athletes who had suffered from a concussion, for example, found that nearly 13 percent suffered “flashbacks,” and eight percent reported nightmares following their injuries. Much like sufferers of PTSD, many were unable to shake the event from their thoughts; nearly 18 percent reported that they could not stop thinking about the incident. In the same concussion study, more than 19 percent of respondents admitted to “avoiding similar situations” linked to the concussion, even though those behaviors were not actually what caused the injury.

After an accident or other physically traumatic event, it can be difficult to determine whether psychological symptoms are evidence of PCS or PTSD. In many cases, such as after a terrifying car accident, they could be evidence of both. Some symptoms, however, are more likely to trigger under one condition or the other. For example, feeling overwhelmed by being on a busy street or an over-stimulating store is more commonly a symptom of PCS. While PTSD can also lead to feeling overwhelmed, it’s more commonly raised by trauma triggers or feeling unsafe.

The athlete study is particularly interesting because avoidance and flashbacks are more commonly associated with PTSD than PCS. However, there are neurological causes to flashbacks, which can be triggered after a concussion. Avoidance may also occur, but medical experts believe that avoidance is more associated with avoiding situations that trigger the symptoms of concussion (such as bright lights or overwhelming experiences) rather than avoiding the mental danger associated with persons and places like the avoidance experienced by sufferers of PTSD.

The takeaway from this discussion is that sufferers of PCS or PTSD should seek help and guidance. Having a diagnosis of one or the other (or both) can help with determining the appropriate course of treatment, and in preventing future issues from arising. It’s also important to note that concussions can carry many of the same debilitating side effects of PTSD, creating additional hardship for accident victims and other patients recovering from concussions.

If you need a licensed, effective, trial-ready expert witness in a personal injury, medical malpractice, or product liability case, contact the offices of Neurosurgery Medlegal Services, LLC, at 866-659-8051.